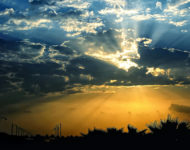 Whether it is the foods that we are required to eat (e.g.,  matzah and marror on Passover), or foods that are customary to eat (e.g., latkes on Chanukah, cholent on Shabbos), in Judaism many a morsel has a meaning.

But so does refraining from eating.

One unique food prohibition is that of the sciatic nerve (and the fat around it) of even properly slaughtered kosher animals. Although this may not seem like a big deal, it has major ramifications for meat lovers. While technically speaking filet mignon is no less kosher than any other meat, it is rare to find at a kosher butcher or restaurant. Because the removal of the sciatic nerve area is difficult and not cost effective, most of the time the entire hindquarter of the animal is simply sold to a non-kosher butcher shop.

As explained in this week’s Torah portion, the reason why we don’t eat the sciatic nerve of an animal is because our forefather Yaakov (Jacob) was wounded in his sciatic nerve by an enigmatic angel with whom he dueled during one dark night.  During that same battle, the angel told Yaakov that his name would no longer be Yaakov, but Yisroel – as the name Yisroel has the connotation of “one who has struggled,” and Yaakov struggled mightily with the angel before he overcame him.  When B’nei Yisroel – the Jewish People, the children of “Yisroel” – consciously refrain from eating a good piece of filet mignon, they are reminding themselves of the struggle of their ancestor Yisroel.

Note that Yaakov was renamed after the struggle, not the ultimate victory. This is because both the name change and the sciatic nerve prohibition are meant to remind us of a fundamental idea – to be alive is to struggle, to be a Jew is to struggle. To struggle to keep kosher when everyone around us does not. To struggle to do what is moral, what is right, even when it is unpopular. To struggle through the vicissitudes of life. And to struggle to be proud of our identity as one of B’nei Yisroel, who are connected to Eretz Yisroel(the Land of Israel).

But we don’t struggle for struggle’s sake. At the end of the enigmatic story of Yaakov and the angel the Torah tells us that “the sun rose for him” and he was healed from his wound. The Rabbis tell us that this represents the idea that one who struggles at night (analogous to times that are unclear and difficult) to do what is right, though they inevitably get hurt in the process, will ultimately merit to have the sun shine for them – they will be able to see and enjoy the fruits of all the things they accomplished in times of struggle.

May each of us individually merit seeing the sunshine we earned through our personal struggles, and may the Jewish people collectively merit seeing the great day G-d has promised – “A new light will shine over Zion.” May we all soon be worthy of this light.

Rabbi Yitzchok Oratz is the Rabbi and Director of the Monmouth Torah Links community. Shortly after receiving his semicha (rabbinic ordination) from Bais Medrash Govoha, the famed Lakewood Yeshiva, Rabbi Oratz, along with his wife Toby and family, moved to Marlboro, NJ where they co-founded the MTL community in 2001. Aside for his “Devar on the Par” that he writes for MTL, his writings have also been published on Aish, Times of Israel, Seforim Blog, Hakira, and in various Rabbinic journals. Rabbi Oratz looks forward to continuing teaching Torah in a way that is timely and timeless, and sharing meaningful Jewish experiences with the amazing MTL community.